I haven’t shared here, I have just been so tired after sculpting (it’s full body, standing, sitting, holding- something this size and floating in the air? yeah you need to use your whole body!)

The latest huge 10 update has also changed all my import settings and my phone is not happy! So I’m still waiting for my images to import before going further 🙂 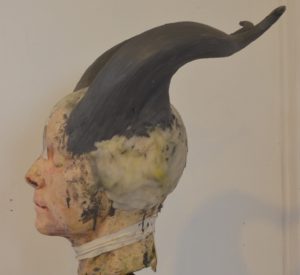 After reshaping the polymorph frame using a heat gun:

After cutting back the polymorph with a dremel. Note the horns are so long the ends look disproportionately large from the rear view. 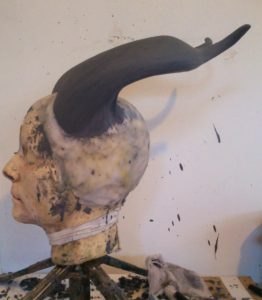 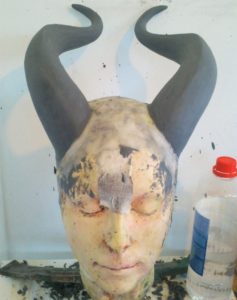 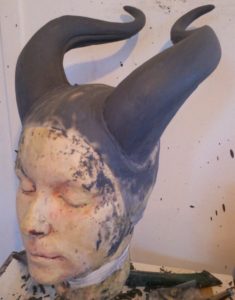 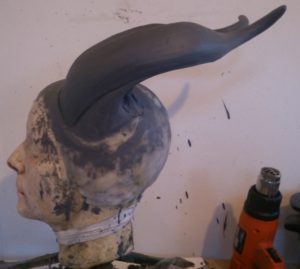 And then to show why I have been taking photos up close despite distortion, it’s more detailed 🙂 My phone does not like even lowish light. But here you can see the horn tips really are not like bunny ears! 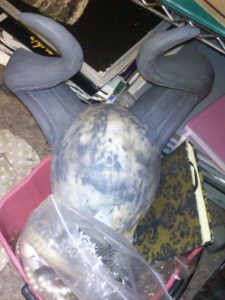 After tidying up the proportions I started to transfer the lines by using a divider (scribe compass.) I did this along the top section on the inside as well as the outside.

After that I used the needle point picker from my sculpting tool set. I pressed the long end across the clay to start and then matched to that line from each side. 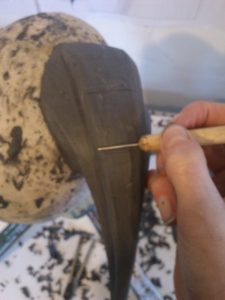 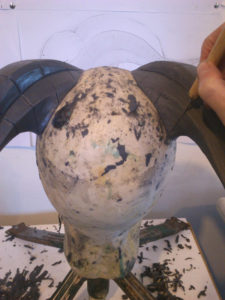 And then I did a crazy thing. I took a paint scraper and pressed it in to the clay by a few mm using the edges to line up smoothly and precisely. 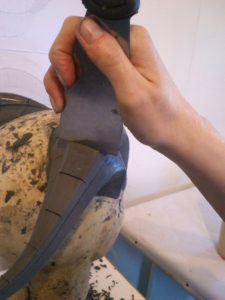 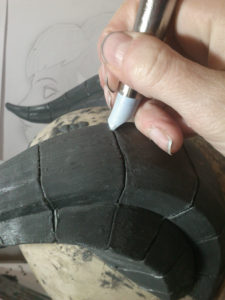 This was imperfect so I spent some time buffing the surface with a cloth in one direction. 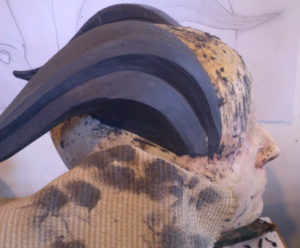 After this I used a large smooth bristled paintbrush dipped in vaseline to further smooth.

Now that I have set in for the night I can see the last bit of evening up I need to do! 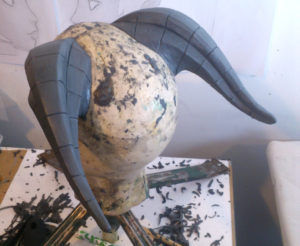 Comments Off on Draenei horns ready to mold

Currently working in three fandoms. While each set of horns is being made in clay I am using slightly different techniques to support them. I’m also hoping to find some way to scan these, though scanning is very expensive as there are very few people with them as opposed to printers!

The weather has continued to be very chilly, which is perfect for sculpting in oil based clay. Well for me 🙂 I much prefer carving so pressing clay, I find I have much better density control if I can carve.

Oil based clay melts in direct heat, softens in indirect and then sets solid when chilled.

When working with chilled clay I need to quickly wave a heat gun across the cold surface- our environment is very damp so a fine film of water can form which blocks the clay from sticking. When heated the surface gains a little traction and winds up bonding to the new clay much more firmly.

I heat my clay in a crock pot (dedicated!) and use a heat gun for spot melting. As this warms up and melts I can brush it on, as it cools down I can form hand molded shapes to press.

But the warm clay softens the cold so there is a limit to how long you can work before the bulk of the clay moves too far.

Comments Off on Multiple horn making

Left hand side rescaled and tidied, the right about to begin!

The right started, I wound up adding a little to the inside of the horn edge and then continued shaving off the top.

I had to leave the sculpt here, it will cool further overnight so I can shave and carve the rhs to match. I usually prefer to work equally on each side but as these horns will be cast separately I decided to get one side sized ideally in case I bumped one of the horns off and had to sculpt without support. It means I can also cast one before anything happens to ruin the sculpt 🙂 But I am so far lucky that the clay is cold enough to retain shape.

Those are also my favourite tools for sculpting:

A paring knife- it is dull! But the blade is fine enough to use it for carving and shaving. Also if warmed it will smooth a surface quickly using one or the other face flat to the sculpt.

A loop of plumbers coil- it is able to be held in a tight or loose loop depending on how much pressure I want to put on the sculpt.

One of the blue plastic tools you can buy in a set.

The wedge shaped silicon brush- for corners and to press caly from one pane to the other in a corner.

Wood handled tool that is a flat topped loop- for carving and light shaving.

And a vegetable peeler. This shaves off much more cleanly than anything else but is only a few cm across. But it cuts back a surface super fast! And leaves only shallow teeth marks that are easily buffer out.

Comments Off on More Draenei sculpting

vastra and all the back is blocked and sketched

VASTRA, AND ALL THE BACK IS BLOCKED AND SKETCHED,

I used the end of a loose craft knife blade to create the lines. Used the flat end of a cuticle stick to push the clay in to rounded shape. Still need to tidy, oh so much tidying.

But I’m on my second iceblock wreath so defitely time for a saline and liquid break. I may need to counter low blood pressure normally (90 over 65 is very common for me, high is 105 over 70) so on days like today it’s a bit not wise to do too much ;).

Well done enough. It’s a case where if I keep going I’ll probably undo the good stuff and then need to redo all over again.

I thought I had two cartridges of silicone but I don’t Shoot. I need at least three more. So no more work on them for a while.

I actually had to undo the previous texture and shave both horns back to get a narrower front and more blade like through the cut through view at the base. Here you can see the horn on the right is smaller than on the left which is the one I textured first.

The only way to safely shape these were to lay them on my chair and even them up with the filleting knife. Yes. This is why I can’t have nice things because that chair is covered in lumps of resin and latex. And now clay.

All my photos, sadly including the baby pukeko (luckily I sent one via email!) and luckily I haven’t really done mouch in the way of costuming since I uploaded photos earlier..

But I did manage to record myself using my texture brush so that has gone… Luckily I have heaps to do anyway, and it looks really good, will soften the texture once it is actually all done but yay 🙂 And boo for finally getting camera, clay and me all in one place only to lose the recording.

Also getting rid of a heap of fabric bits and jewelery and everything. I gave friends a chance to snaffle them up but now they are going to charity. Still got a few costume pieces to tidy and pass on as well. But about 200L worth of stuff is going byebye. And it’ll be a relief 🙂

I’m an obsessive maker. I don’t buy much for costuming except for shoe bases, wigs to cut and/or style or very rarely a licenced piece that I know I could make but it wouldn’t look like the original injected item. So I have a couple of sonic screwdrivers, a TRON disc, Trek communicator and tricorder and an E11 (white!) all to modify.

But I am at a point where I am pretty satisfied with my catalogue of skills. Not complacent but I am not quite so driven to try new stuff because I need to know now. Also I’m getting older so I really want costume pieces that will work with me.

Hooray for badass older characters like McGonagall, Flemmeth, Granny Weatherwax and co. But Maleficent and my custom costume will work for a long time, ditto all my historic gear. And frankly my Shae Vizla will work really well too. Though I really am so tempted to make the RD16A gear. I really am. Aside from the mystery kidney belt thing. May just interpret it as exactly that because it is very unbalanced (goes up to bust but sits at the upper edge of a belt- yay for female gear defaulting to hip level belts!) Which means you’ve got solid edges knocking and sitting and trying to be in the same place at the same time.

The point is, as I’m zoning out, that I don’t mind letting go of a lot of what I have stashed. And I also don’t need to dispose of it right now, right now, go away! So I can take my time.

I also realised I have been actively avoiding sewing. I mean full on avoidance. Do anything to not use my machines. And I’m not sure why. Even hand sewing. I seem super reluctant to wok on my Hannibal skirt for instance. Maybe it’s that. Maybe it’s the task of putting the skirt on the netting and also fitting the bodice which is basically a corset. It might well be. I have several sets of stays also out back not finished.

Got them up 🙂 They aren’t as big as the file from the camera but they are at least fairly clear.

Explaining my main tool use- a loop of metal strap that carves and shaves.

Super short shot of the loop used to cut.

Finally using a silicon tool as well to help shape.

I learnt something watching these myself 🙂 I use my hands a lot. A lot. Constantly holding or checking weight. I’m not sure if it is in one of these but I do sculpt at night or during cooler days. This way I can carve the shapes out and press texture in without worry about melting the clay with the heat of my hands.

Anyway, I kept the videos short worried I would not be able to convey just why it’s hard to teach how to shape. It’s a mix of learning types- hapatic and visual mostly and both are difficult to convey in digital media. But I think there is something here that is at least worth sharing. 🙂

I will probably look at this in the morning and redo it all. But for now I am happy to leave this to retexturise tomorrow.

All the pieces (except the mandibles, I need a funky angle for them 🙂 ). It was so hard cutting my sculpt apart and carefully transfering the pieces to work on individually.

Also my tools! I use only a few in reality. The paring knife and craft blade most. Then three of the silicon brushes. (I put them sort of in order with most used at the front). Mostly work with hands as that is what I tend towards- pulling shapes out and flattening them rather than carving. I tend to work as a builder of positive space than a remover of negative. That said I do like to train my brain and work with negative space on occasion. it’s just not natural for me 🙂