I got carried away..

I still have the 1880-s to go. The original site is prone to falling over, so this has taken many hours today! but I do like that there is a very clear change while retaining useful elements.

I’ve kept the large preview images in my site with links to them on the site. I was going to link to the scaleable images but they can be even more unstable than the images/pages.

Also, now that I’ve found the original files I’d love to give credit to the person who has already lined created files with lines in different colours. I’d like to link from here as I have links to the instruction pages here.

Supplements from Der Bazar! I have a stack to go through and make a good proper post about, possibly a plage. I have terrible tagging habits so a page may be best.

Also I’m going to switch up blog settings to share “medium” sized thumbnails as the thumbnails seem to be smaller. I love this theme but it is now possible to put images inline now as well.

So the current list of things wot to make is ridic.

Mon Mothma -my current one has shrunk so if anyone 5’3″ and shorter is interested… I’d really like to have a slip on costume as I’ve got so many complicated layered costumes as it is. 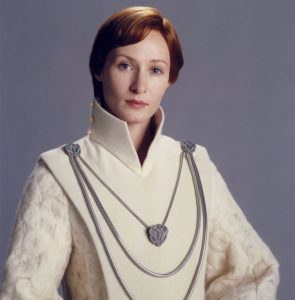 Yes. That’s Genevieve. I was so looking forward to seeing her in Revenge of the Sith 🙂 So perfect casting in Rogue One is more perfect and established than many realise 😉

(My apologies to the gif maker, but LOOK AT HOW BIG HER BUNS ARE!!!! Higher than her hairline and over the top of her collar. Onto her cheeks and extends past the back of her head.

I wore her to the Rogue One premier, it’s actually really pretty but the belt is real leather and has stretched so it sits on my hips which is wrong and incidentally makes it look like my waist is huge. I need to make the boots, in fact they are the sole (get it??) reason for wanting to finish. But I’m also happy passing her once I have Mothma! But the wig I made uses two price lacefronts

Oh my goodness. In SWTOR my relationship with her has been tough but I’m so glad I made the decisions I did.  Just realised I have stretch twill in off white and grey that is perfect. I knew I had enough plastic but woo! fabric!

Please do watch, the expansion does pack a wallop too. There were only a few moments I felt locked players into having to do something- and they were intended to add variety- for my hands they were only doable after my infusion which had a lovely pre-med prednisone infusion and other help.

Just got some email in game from characters, they are pretty expressive too.

SPOILERS! But you can watch the opening cinematic and crawl to at least understand why I love playing so much! BTW I tend to play Empire but light side. I’m such a Granny Weatherwax! And I usually play from level 1.

Speaking of feels… Ahsoka grew up with the audience who followed her in TCW. Her leaving TCW was incredible. The story group respected her so much that her story was not predictable. Her last TCW story was familiar in real life. Who hasn’t had to deal with the accusation of “where there’s smoke….” So I may have related a little too well!

Anyway. I’m not 14 so grown up Ahsoka is a little more me! So far all the leather has been tooled and shaped. The sabers are being worked in Sketchup.

My montral are curing right now, I’m trying to do them in two parts to really control the latex thickness. More latex is on the courier truck right now. As of typing.

Right, it’s time to make, so my post is really about my current SW costumes. I also have a Padme Light Blue to remake. Need threads…

I have not been able to even touch the surface of my collected files so my first post was about following a single lead that had the potential to be an all in one go to source. Der Bazar had several corsetry articles, and it looks like they appear the week before they do in Harper’s Bazar.

And that makes sense, translating and setting up type to print a new edition takes time.

But I haven’t had a chance to do so, and I am a bit too sore to update from my archives.

These links are all from Antique-Gown.com as they are so perfectly illustrative.

Piping. This has piping! And a full separate lining layer. It makes me feel better about my earlier corsets as there are some seams that drift a bit 🙂

This has some awesome construction details! It appears to have a single layer lining, except the shell and lining are turned out in the seam that follows the bust and a strip of shell fabric is applied over the cording and seam allowances and sewn to hold three strips of boning. This may make for one of the less fiddly construction method- aside from the whole sewing through the cording thing 😉

A lined corset again, this time with a shell facing across the inside back lacing panel. There is also a waist tape and a tape used to support the inner seam of the bust gores.

Seriously beautiful lined corset. The lace would ad a very light support to skirts and bodices, a bit of padding without looking like padding.

Again, great views on the lining. The bust gores are treated the was Der Bazar shows- with overhanded/cast stitches at the base of the gore.

This corset is a single layer, with self casing on the outside and a self facing over the back lacing holes (face of fabric outer.)

That is peach plush velvet yes 🙂

Shell and lining, the lining appears to have SA opened.

This is a single shell layer corset with casings of a different material on the inside. I think this is the most easily replicated construction for at home as the seam allowances are left raw. There is no attempt to fully welt them.

Also has a waist tape.

This website has several more corsets to look at, this is just a start but should be a springboard for anyone who wasn’t sure what construction method to use as there are several options 🙂