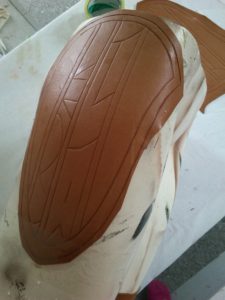 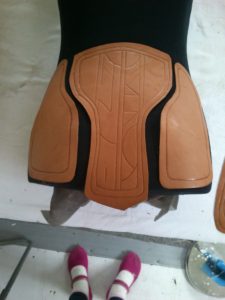 That is leather wetforming on two sets of forms. So lucky to have been given one and the other was a very reasonable auction!

Today I have put some chrome tanned leather in water to soften so I can form those. There will be a layer of cloth between to keep them stabilised.

I’ve taken the concept art of Ahsoka and scaled her to my height- so 168cm from heel to top of head- so I cropped the montral off and the heels of the boots.

And I have checked head height is accurate, height from waist to should is right..

Her “big” lightsaber hilt winds up 34cm long! And yeah in the concept you can see it goes from about hip crease to above the knee.

I’m going to check the scale on the figure because I don’t think they follow that proportion. The figure is about 125mm from heel to crown.

I grabbed these images as screencaps, her arm and saber are approximately on the same angle, mirrored, and then in line: 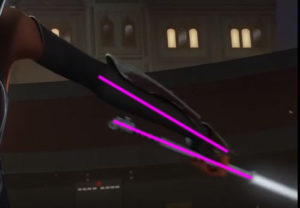 I used a line tool for the length of the light saber then copied to a new layer and altered the angle to follow the arm.

In both cases they line up.

And that is as close to 30cm on me as can be fairly judged.

To note, the saber is curved, quite definitely so, but I have printed out and used my ruler to compare length from top to bottom along the surface and at right angle to the top. It’s very similar.

So, now that I have a dimension I am happy with I can actually start work in Sketchup!

The next few months have many opportunities! As always there are the Special Children’s Christmas parties, then there is a couple of Steampunk shoots, also the Bal d’Argent, and the big Santa Parade (yep, you’ll see me there XD) and also there are some opportunities for next year that I’m just insanely excited for 🙂 Also of course Rogue One and N7 day 🙂

I have been watching my Ahsoka mold like a hawk, it is finally starting to dry! It’s still very fragile but it is drying out. It’s just past the point of being able to be trimmed!

I didn’t manage to check what leather I have, so I’ll do that again tonight.

I also am incredibly inspired for my Marie Antoinette and for a vintage gown I really would like to break out for the Very Vintage Day Out next year. I also know I will not, I repeat *not* ever wear that sunblock again as it just ruined my make up and hair and thus all the photos. It was supposed to be “oil free” and how that can possibly be allowed I do not know as the carrier is an oil. I think it was a silicone oil though. SO I guess technically… anyway, my skin and oil is just not good. Never has been, it basically burns my skin, doesn’t matter what kind. Maybe almond oil woild be okay. But even Argan oil can be a bit.. aggressive.

Right, so I’m going to go look at my mold, check for what letaher I have and also get the pvc pipe out ready to put my Ahsoka templates on 🙂 Going to make the armour from stuff I know I can heat shape and that won’t melt! Basically if it’s good enough for building structures meant to last for decades that’s when I’ll use it for armour 😉

This works! I love me some smart bb and wp!

#ahsokalives first texture pass. I need to let it all cool so texture can be carved in. Atm it’s all smooshing. Overnight will do it

Yes! #maleficent horn texture and #ahsokalives #togruta skin marking success! Now to do this over the entire sculptures!!!! by pinkdiamond, on Flickr

#ahsokalives #ahsokatano texture worked really well! My camera has low res though so had to do a close up. Next stop, #maleficent2014] bypinkdiamond, on Flickr

#ahsokatano sculpt prepping for mold making. Built up as much support out of foam as I could and melting clay while doing so. I may want to clean all of this after! Definitely will be mixing in some other colours. Purple and blue? by pinkdiamond, on Flickr

#ahsokatano from the side. Polystyrene and clay support them clay wall. That brick red? 2.5 kg. There are 2.24 pounds per kg. I think there is about 6kg of grey clay. It fills a crock pot anyway.
by pinkdiamond, on Flickr

#ahsokatano 10kg of ultracal plaster, about. 3l of water, big guess there though, and the top of. The mold is made!
by pinkdiamond, on Flickr

#ahsokatano left to rest. I checked and it is cool enough to leave it be. While it steams it is prone to cracking but this is quite cool. The towels are wet to help this cure. by pinkdiamond, on Flickr

So after a very long period of no progress I suddenly have some? It’s all to do with working on my Maleficent horns. And having already cast my Draenei horns. I just built up my skill set from last time so was able to not only work faster but get texture details I have not managed before! Rounded wrinkles of a certain size have been the bane of my existence! I’m now finding them fun, so all the work that goes into them has a positive result which yeah- makes the repetitive nature soothing rather than stressful

Side note, I now have a drywall trade account (well not trade trade, just a normal account). None of the mold supply company stocks it. But it’s still used by tradies for buildings. So… what the heck! Seriously, I haven’t found it in more than a year at any of the SFX supply places. So I grabbed the 22.5kg bag while it’s still in the country!

I did decide my hoops were going to destroy my peace of mind yesterday so instead I trimmed some wig heads (the neck to fit inside my mannequins and the foreheads to actually mimic my face shape- will turn them all in to custom wig heads along with a tutorial.) I also wound up sculpting. 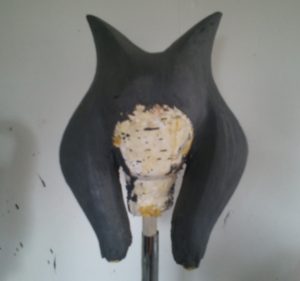 The reality of sculpting is it’s messy and takes forever. But it’s cooler today which may make some of this easier… And I really really really really want to put those horns on a much better headcast. Don’t lean forward when making a head cast is all I’m saying.