I managed to get a one month subscription to Autodesk Remake (not easy with geo-locking and my country not being specified, and then I wasn’t sure where in the app to put my code (hint- cog-> welcome screen.) but so worth it! I’ll do this again later in the year as I have so much clay and now have a good idea of what the scan will capture. 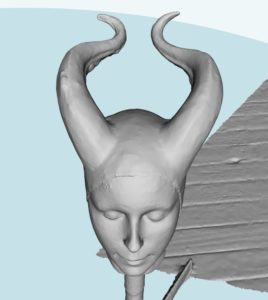 So tomorrow I’ll attempt the full 250 in the backyard (currently a bit swampy- thanks big storms) as this is a marked improvement! Also I’ll possibly even be able to take the horns off my head cast and try them in total isolation as well as get my head cast done.

I may also see if I can get my hands photographed 🙂

I am so wishing I was able to get the texture detail to work, it might make the model easier to capture in fact.

I have been using @Autodesk @AutodeskReMake for a while. Just the free version while I practice how to photograph my models. I think I finally cracked it, and it’s almost certainly going to offer great results once I pay for the subscription and can send 250 photos not just 50 😉

So my very first test.

I can’t find my photos but basically I started with the head cast a little way from my far workroom corner and took photos with it stationary.

Looking at the model put out through different angles:

So here you can see the rest of the room was partially captured but the sculpt is well defined. 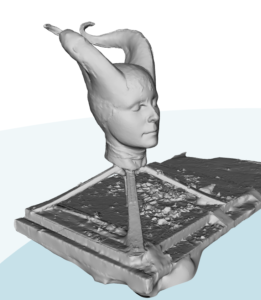 Isolating the sculpt and it’s even captured all the clay shavings! Just a few lumps in the horns but otherwise I’m impressed.

However I was not really able to get close enough in all angles around my sculpt to get decent shots of the underside of the horns.

So I watched a few more tutorials and a few suggested rotating the object rather than standing up and lying down to get angles otherwise difficult. 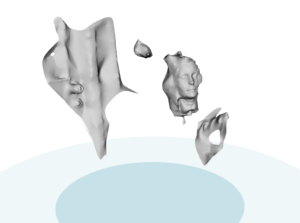 This was in the same place as before. The doorhandle looks mildly terrifying… 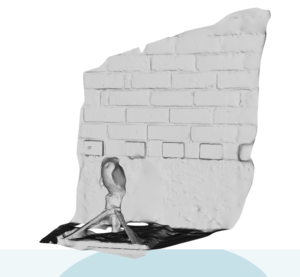 Still on the same stand and this time against a wall in better light. Well I have bricks!

So I painted the horns pink! And put them on a tall stand to really isolate them. Again the horns disappear and there is a great view of the wall.

Okay so obviously this sculpt needs to be static not moved around. I realised the back deck is often protected from harsh sunlight but offers good light bouncing from many surfaces. So to the deck with my pink horns on a spike and finally got this:

Lots of background but the horns are easy to isolate. 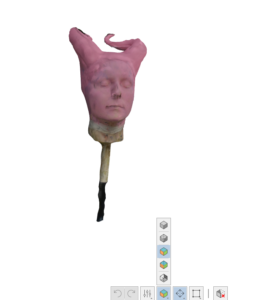 So finally some of the ridge detail is captured! But still quite lumpy.

Each model used the 50 photo limit. I do think with 250 photos I’ll be able to get all the detail needed.

So for a sculpt like this, of complexity of line:

Do make sure the model is static. Do not rotate it for different angles, move yourself around instead.

Get some photos with the full area around you as that will help isolate the model and put it in context.

Get some mid distance images.

Once those are done you can get in close. I have to reset where my camera focuses because I got a few where the point was on the deck.

But yes. I’m going to set up a few sculpts outside so I can digitise a good number of them. Shae for one, old Maley horns for another. And I’ll melt some clay and pour into some other molds to capture them as well 🙂 I think with one month Subscription I can get a reasonable number captured. Heck I will even capture my Togruta horns for in case I have to move and my molds have to go bye bye. I may have someone who could take them on but I’m not 100% sure. 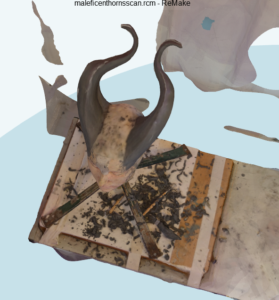 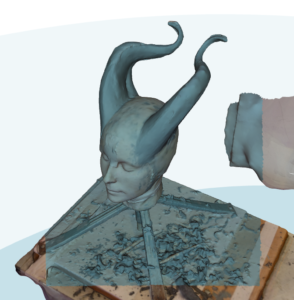 That would be a 3D scan of my horns created from about 40 photos from my plain old DSLR! I have yet to find the “remove everything but the selection” to remove the background of my workroom but.. but.. I may be able to tidy the sculpt and more the table more centrally in my room and then mask off the walls. the few errors in the capture of the horns has a lot to do with not being able to get to the back of the stand.

It did take all night, and I may have to make sure the model doesn’t accidentally wind up published but yeah. I can probably also scan the head cast for fully 3D sculpting! And I will be able to get my hands done too 🙂