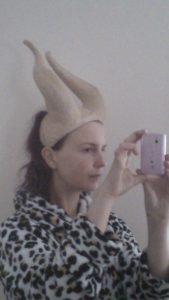 Very happy with the new shape 🙂 I knew my original sources were not clear enough so I aimed for narrower and with fewer topographical shapes. Now I have the nubs on the top and the extra core at the underside.
The extra fill has made it heavier so it will need to be cut back from the inside.
I have a bug so my head hurts from just getting the photos. It’s the bug and the untidied underside.

The head cast has also been cleaned of most of the PVA and even some of the extra layers- they were luckily not properly prepped so were able to be levered off. Which will mean I can use my headcast later for a better catwoman cowl eventually XD But meanwhile will work for my prosthetics.