The skirt and part of the drapery has been draped! I went back to my trusty Harper’s Bazar and Patterns of Fashion as a reminder. I know I have a few pages dedicated to cutting skirts of this era, but there are times it is handy to have an extant example and an idealised example to work from 🙂

But ultimately my 19thC skirts: Pattern diagrams || cutting guide for skirts pages summarise what was going on.

So that is a nice start, but I wound up wanting pleats on all those panels so di the top and tailing thing s per my pages above, and as per the guides at the start of Patterns of Fashion. 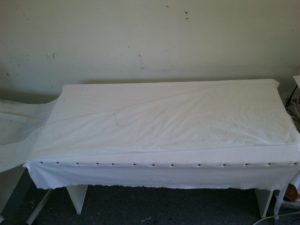 So that was a nice start heading back to this era 🙂 Note the net is double layered so not as sheer as it will be.

I even managed to test the trim.

Then came the part that I just declared loving- weird drapery. So, fashion plates definitely do… idealise… things. Think of it as early shooping. In fact it’s so prevalent, like photoshopping, that the few plates that look realistic often look out of place. One of the plates I keep looking at is of aesthetic dress and it includes wrinkles, actual wrinkles!

Anyway. No photos of the marking out or net I cut without thinking, whoops- but it will be use to make the points of the drapery.

But I did have a brilliant idea of turning the fabric sideways and pleating a section before putting it on the stand, angled slightly to a dip about 1m from an end.

So asymmetric draping that started as symmetric! Those pleats on the RHS were the sticking point. The plate does a very good job of making them look like they are perfectly vertical, even offsetting them a little as you’d expect from tension that the ties and front would apply, but of course this just does not work with what the text says which is to imply the LHS is the immediate result of the RHS meeting the front. So I use  my basic principle of “good design lies”*

So the selvages are horizontal on the RHS and perpendicular to each other on the LHS. I have a few darts at the front too. This still needs tidying, but the darts and pleats will need to be tacked in place before taking off the stand to preserve their shape. (There is dress making advice out there of the time that basically says all modern dress was pretty much draped and that was the only way to get the look for a lot of them. Time to raid the virtual archives!)

I had to just treat both pointed extensions as separate pieces. In part because it’s summer and humid and I had already listened to the entirety of Les Miserables (Complete Symphonic) and was running out of patience.

But it will work. So the next step will be to sew the skirt panels together. A whole separate post about that! WP is not cooperating between my host and my desktop- I’m on copper and my files are not insanely large but they have to go one at a time and even then it’s iffy. So posting is more difficult than it has been in quite a while.

But I am trying to make the habit of posting properly once a day.

*AKA if there is a belt or a scarf there is a seam it is hiding. Or The Lord of the Rings Effect- Eowyn and Galadriel’s gowns were fitted this way. It’s a really good method for the 1920s gear I’m making too.

Finally decided to just join in the picnic fun at Howick Historical Village on Jan 15 instead for booking for a dessert buffet (that would be fun but this should offer a nice range of things to do:)

So this is the timeframe to make the sheer frock as I am not wearing The Mina in the middle of summer!

By Car from Auckland City: Travel on the Southern Motorway (towards Hamilton), take Exit 437 (South Eastern Highway) following signs to Pakuranga. Turn left onto Ti Rakau Drive, then right on to Pakuranga Road. After traveling 2.4km, turn right into Cascades Road, and then left onto Lady Marie Dr.

By Car from South: Exit the motorway at Manukau. Follow the road signs to Botany via Te Irirangi Dr, then continue along Botany Rd, veering left at the first roundabout onto Aviemore Dr, and left again at the second roundabout onto Cascades Rd. Lady Marie Dr is on the right, just past a pedestrian crossing.

By Bus: Howick and Eastern Bus Company buses depart from Britomart in downtown Auckland city. For more information and bus timetables, click here or phone 09 273 3660. Make sure the driver knows you get off at Lloyd Elsmore Park in Pakuranga, not in the modern Howick Village!

By Ferry: Fullers Ferries run a regular service from Downtown Auckland to Half Moon Bay, which is a five to ten minute taxi ride from the Historical Village. For more information and ferry timetables, click here.

Yep, the stand is padded because I want the idealised figure and while I am from the neck up and the ribs down, it’s that middle section that needs period accurate help 😉

Yes. This is good. Might not work with the princesse as I hoped but well it was probably a bit much to hope for too many multi-purpose uses out of a thing with a train!

So nice to get back to this era 🙂 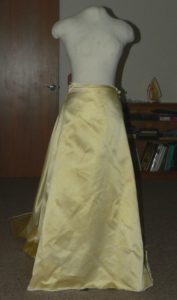 Spot the totally ridiculous mistake(s) to have made on the Sunburst. 2009 and I was a bit heartbroken so it got put away. I have salvaged a lot of the silk though. It’s still quite gold but not much can be changed about that 🙂

This section of my portfolio is lacking as I really need to find the original photos and tweak them to look good and in higher res.

I am knackered. But had insomnia so resorted my current/long term projects . Then had two hours sleep. My coordination right now is terrible so my typing is taking time!

ANyway, I am very proud of my princess petticoat 🙂 It fits the way I want it to and it comes very close to the 1878 day dress from Snowshill manner in patterns of fashion.

The only dart I am missing may be due to needing to widen the CB panels to  get the barely there look. 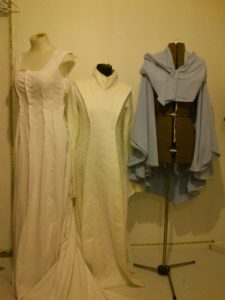 Oh yes, that is Mon Mothma (to be passed on to someone no more than 52″ at the shoulder because she shrank. I have new material just need new dye remover.

This is going to be made into a walking ensemble!!!

Both of these have the tiny herringbone weave of a coutil so hooray!

The pale blue stripe though is inspired by a Whitaker’s Auction.