It’s not surprise I am obsessed with the style. I have been for more than a decade but never found a fabric I thought would do the style justice. Well now I do have a fabric! And thanks to an online friend sharing images from her own research that connection was sparked and the final push to actually make one inspired!

Many moons ago a very well respected costumier who creates the most amazing 18thC gowns gave me information on a few mantua especially one of my favourite gowns ever, he shared privately but there is now an official source: 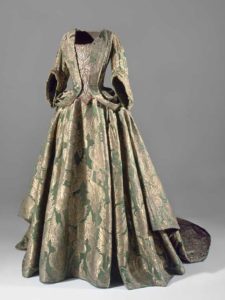 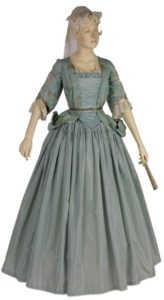 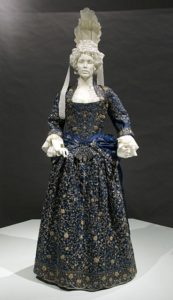 Collections of the Lincoln Museums:
Usher Gallery, The Lincolnshire mantua
(There is a pattern to a similar garment in the first PDF, also a skirt layout and layout of the train. All three documents are available to download and are incredibly fascinating!)

I have another favourite from the Museum of London but there is no link online.

I will share a thumbnail though and hopefully in time the museum will have this on their site:

This does not appear to in their collections, I will update as soon as I know more. I much prefer to link to the collections rather than take from a book, but I can at least, hopefully, generate interest in this garment!)

So I have a fantastic start, a nice range of extant garments to look at trends and to decide on particular style.