These are two casts from the same mold. I love my Ashara but I basically made her from an imperfect cast. The mold had separated a bit making for blunt montral and the tops of the lekku was too thin so I cut them off. This leads to the montral sticking away from the face. 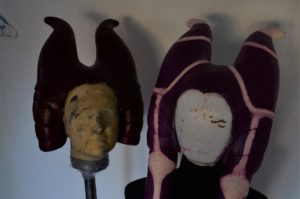 Just to show that Shara was an imperfect cast!

Again, my grumpy cast is doing double duty while my good cast has my horns 🙂

I am having a day of fatigue and turning it into a day of rest, and have been also having some antiinflammatories, which seem to be at least helping a bit so that’s great 🙂