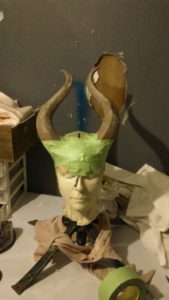 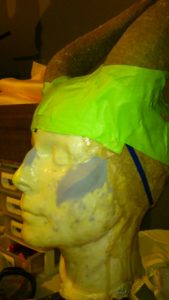 So I wasn’t sure I could get away with such small appliances but I can and they really do make a huge difference. I have a much more pointed nose than Angelina and was worried the nose piece would make my nose look shorter, but it does the opposite! It’s not just a bump, it’s very carefully tapered so as to raise in to the bridge higher than my actual nose. That piece makes it longer, and I would not have known unless I had my facecast to actually look at it from the outside

The cheeks are no deeper than 1/2″ and atm about 1 1/2 wide, if that and that will get smaller once I start smoothing it properly (after peeling them off, evening them up, and then sanding the PVA layer on the face). So very close to the originals. The mainly move and sharpen the cheeks unnaturally than really change the shape of the face. In part because they need to lie only on places where there is not a lot of movement so avoiding the eye socket and going past the apple of the cheeks. I may move them a bit further in to the temples though.

In order to get the horns off I may have to soak the head in water to soften the PVA and peel it off. I’ll do that once I get the horns stabilised and ready to test. The bogging stage will not be messy as the filler can be used at densities high enough to make it hand formable and non sticky.

The horns are slightly asymmetric, I need to check this on my own head to see if it is obvious in reality.