There are a few costumes in this movie and they all seem to reflect Maleficent’s change from child of nature, to a monstrous (though wrapped very much in humanity) and possibly back again.

My screen caps go to my own site, thumbnails of other media go to the source.

(there is a costume that is only seen in behind the scenes, but it appears to be her above gown an a heavy lined and well worn robe that she wears with her hair loose but the gown harks forward to her possible next costume. 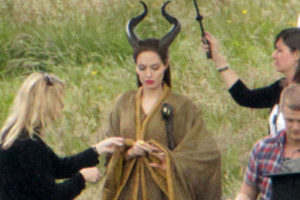 However her very next appearance is a one off where she is deliberately trying to strike fear, and that is the very familiar robes from when she appears to return after being forgotten.

She does find baby Aurora and this is potentially one of my favourite of her ensembles. There are more images in publicity stills. But it’s clear she wears this when Aurora is a baby and then to create the wall of thorns. 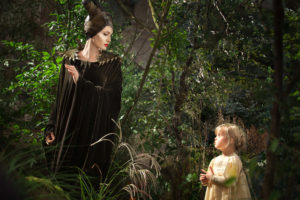 She watches over Aurora as she grows so these next two outfits show her conversing if not easily at least in the open with her.

Here is a bronze silk gown that harks back to her first colour palette.

And finally.. this gown confuses me in terms of time line. This is potentitally the gown Aurora asks is she really is Maleficent but she also appears to meet her fort he first time. But there is a scene where she put Aurora to sleep. 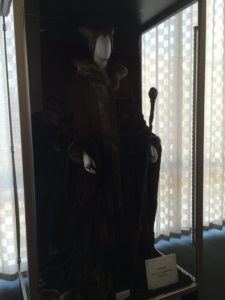 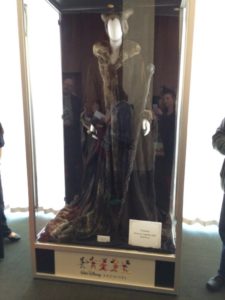