Why I am obsessed with the Maleficent Christening Gown

I thought I’d take a bit more time to explain just why the gown made me take a breath and stop and be able to see right into the heart of Maleficent even before we heard her words.

We’ll start with the court, as they represent the human world, and it so mimics parts of our own. The people are all wearing heavy fabrics. Fabrics that are not only heavy but stiff. They don’t drape, they hang. Even with veiled headdresses the overall appearance is of people wearing things.

They are dressed to please King Stephan and his own clothing reflects this, and further. He wear fabric that looks like rock, or steel, there is a flat watery pattern to the fabric but over all he looks hewn like the stone of the castle. 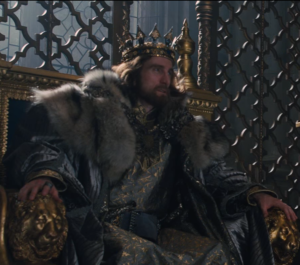 The colours are cold, he is surrounded and enveloped by his own fear and need to protect himself from Maleficent. He has waited years for her to truly confront him.

More than that the way he is dressed is how we perceive kings and queens of the past to be dressed, to impress but impractically and in these very heavy robes.

And then there is Maleficent.

And what she wears is a huge statement to Stephan and the people in the room.

Maleficent was not invited, she is an outsider. And she made sure to not just let everyone know she knows that, but she does so using their fashion, what is familiar to them, and totally makes it her own. 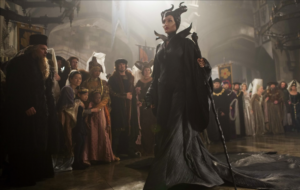 When we see her in juxtaposition with the crowds, even the visitors from other lands, we see horned headdresses. Hers are real. She has them on display, but literally sheathed. She is letting everyone know she has her power restrained right now but that she is powerful.

The surface texture and colour of her fabric could blend in with the crowd. Even her low V neck and train. But again they are all, odd, and weird when seen in the court.

Maleficent’s gown is out of time and out of place. It could only have been made by a master in bias cutting. This one difference allows her gown to flow like liquid, her sleeves to billow and ripple, and finally for her train to shudder gently as she walks.

So her gown mimics the ripples, and the cold, of Stephan’s garments but her gown feels alive, an extension of her. Again this is because her gown uses extremely modern draping. While the rest of the cast could have had their garments drafted and fitted, this gown had to be made on a form, and more than than that several times as the bias of fabric alters the hang and fit of a garment permanently.

What is so wonderful about Maleficent is just how modern her costuming is, it both feels familiar as we are now so used to bias cutting, and yet distant as many of her garments feel like they could be from the Golden Era of Hollywood.

This is where the designer and the technicians work together to realise an idea, to make it feel part of a world, to use the physical properties of the materials to create something unreal.

The Application of Bias Cut in Clothing Design

Bias cut is one of techniques in clothing construction. The 45°gyrosigma produce tensile elasticity to have the custom curve and outfit more graceful, elegant and lively.

Development of the Bias-Cut Dress Pattern Making Method by Applying Fabric Draping Ratio
Park, Chan-Ho; Chun, Jong-Suk
This study aimed to investigate a bias pattern making method with geometrical approach. The bias-cut dress has soft silhouette of drape in the garment. However, the bias cut dress has problem of satisfying the intended garment size spec. This problem occurs from various sources. The main reason is that the bias-cut fabric tends to stretch on longitudinal direction and to shrink horizontal direction when it was hung on the body.