That’d be my Mr Boo.  Boo the hamster is hiding in the black hoodie pocket just visible as a shadow on the left. This is not the same day as the last photo. This is now his Spot.

It may be cold and I may have used trickery. Well more like…. Here, this empty onesie is just like your fluffy, see, soft and fluffy and warm….

Oh the onesie has something in it now that it smells of you? Oh does it? I had no idea.

So this is now a thing and I may not be able to take behbeh krogan with me. But I do want to make her some appropriate baby krogan gear. But my headcanon is that Wrex and Bakara would indulge Shep in this need to share pink fluffies on occasion..  Mutual admiration and such.

My headcanon also has Mykka Shep attempting to knit and it being about as good as I can knit. Except I can’t at all due to the specific deformations caused by my arthritis. But it would look like that. Uneven tension and skipped stitches.

Because I really can’t knit.

Okay I managed enough for a Girl Guide project. I may take some photos because I even had a tiny teddy pattern at the time. I was 11.

Someone gets new clothes..

Baby Mordin now has a pink onsie. It is a present. I may have hinted that maybe Mykka Shep would maybe sorta indulge the litle monster (shhh no sad ending, I did not accidentally reboot the galaxy…) especially with, by then, very vintage if not antique human artifacts. 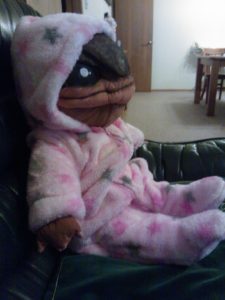