Anne of Cleves back on track :)

I have several enameled medallions on the way to mix in with my hand wired roundels already shared.

These are going to be used to make a full set of neckline jewelery as per the Bruyn and Holbein portraits or Anna von Kleve Julich und Berg 🙂 I’ll be aiming more for the Holbein style as it is very obvious as to the solidity of the border versus the main body. That little wrinkle at her right should (our left) shows this so very well.

I’ve also cleaned brass leaves and flowers and will work on my kranz (wreath) as I should be able to replace nearly all those leaves.

I love this book. It was a very lucky find a good decade ago. It does suffer from an Anglo centric view though. Calling Anna’s clothing unfashionable and not tasteful is just not correct.

She was incredibly stylish.

She just happened to live in a region with nearly equal influence from the Burgundian courts and Saxon courts. And her dress right here? Exactly what you’d expect! The other Bruyn portrait, and less successful copies, also show pretty much what you’d expect!

This is why I love Koehler and Boehn as resources- very continental so you see the general shapes from the Italian states, from the Burgundian/French/English courts, and also Saxon. All those Cranach beauties.

Need I say more than that she wound up an independent woman with enough money that she was able to spend poorly and still be safe politically and financially? That even though she didn’t know English she managed to survive insulting Henry (by accident but in front of lots of people)?

I suspect then as now it is much easier to understand Dutch if you are used to English and vice versa than it is to speak either. The language Anna spoke is much closer to Dutch than Deutsche then and now.

Sentence structures are so similar I can read personal documents of the region and understand them. Yes I’m looking for clothing terms but I’ve read a heck of a lot of gossip in doing so! And so I think Anna was not only much smarter than the English have made her out to be but understood what was happening right then and there. yes, she would have needed help to write her letters, but she knew the content.

Obviously she couldn’t go back home- but by staying she also had to survive conspiracies. And the court was absolutely full of very dangerous intrigue.

To survive that takes more than just luck or a yielding nature. If she was that easily manipulated she would have been so the rest of her life. And we know she was used politically. A pamphlet written as if it was her was shared on the Continent and yet she survived those too. Not many people survived one bout of politcal manipulations, let alone several attempts to get her back in the marriage game. Yes, there were people who wanted her to be queen long after. In the English court that is.

So no, I don’t think she has had fair shakes! 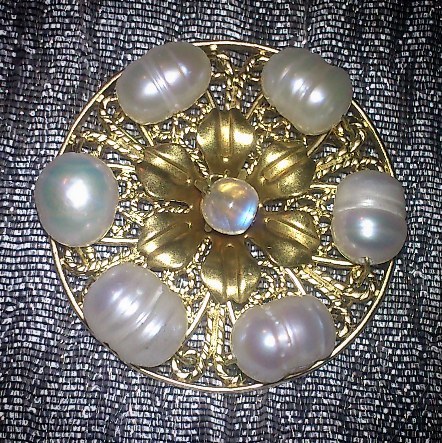 Okay so this is one of the roundels 🙂 It is a circular pendant with a brass flower in the center, a moonstone bead in the flower, and 6 large pearls around the outside. The laurel medallions are bout the same size so will have the same brass lowers in the centre with garnet beads in the centres. And I’m going to try and get the extra beads and flowers on my stickelsche.

Or I may wind up putting the garnets on these to make them look even less like the white rose used for another order 😉 Six petals vs five and obviously not roses, but sumptuary laws are sumptuary laws.

Tagged as anne of cleves, cleves