My sincerest thanks to all the amazons who have shared their photos of their experiences on set. It is truly inspiring and very much appreciated The Amazons mean so much to so many, so thank you.

My previous post separated the three types of armour worn by the bulk of the Amazon Army. This post is to try and describe the different elements of the skirts, as well as can be observed.

These are my my own observations, I look forward to being proved wrong by the Art book!

A lot of the amour has very strong ties to the Hoplite style we are familiar with- especially as viewed through Hollywood. And as such it is great fun finding these echos and individual twists on it!

A spin on the Pteruges of Greek armor! The short skirts with very clean cut straps are replaced with long skirt that has very irregular edges. Still made from leather and with an interwoven belt.

The skirt straps are woven leather made in one piece with the lower layer of what is the equivalent of a “mitra.” This suggests the horizontal straps are shaped to fit the curve of hips. 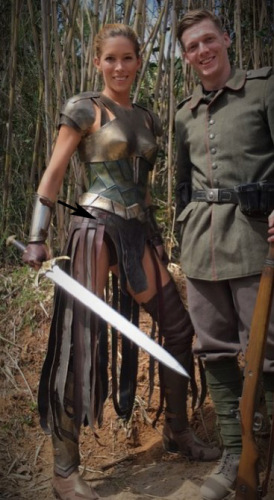 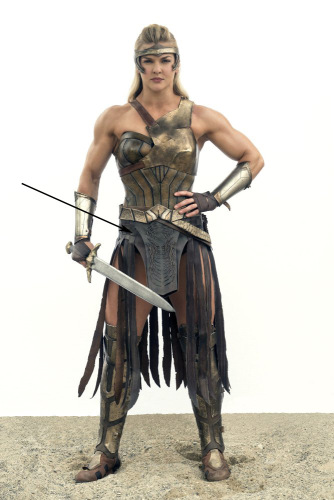 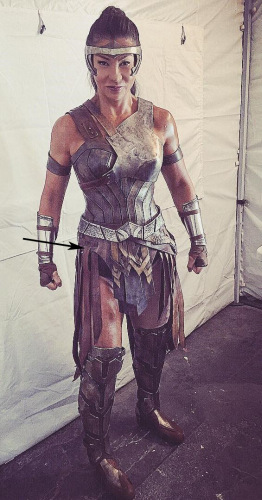 The following photo snippets show the leather straps are a vege tanned leather dyed and weathered. The ends flare slowly then taper to a jagged point. The original colour of the leather can be seen on the inner waist of the first photo. This also shows the hide is fairly thick and the woven sections to appear to be flattened (malleted while wet?) 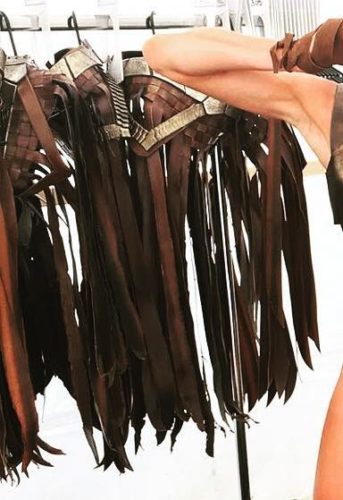 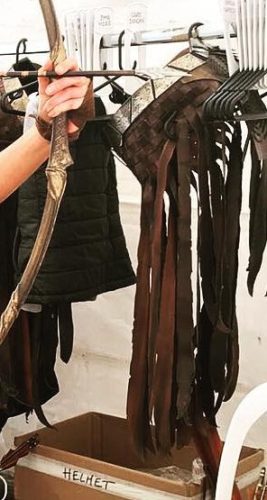 The woven section is 4-6 rows deep below the line of the belt with between 1-2  rows behind the belt. The vertical straps seem to number about 28-30. To get to this number there appear to be 4-5 each side front, and 9-10 each side back, then a few for the sides. The straps appear to be close to an inch across at the top widening to 2 1/2″ at the bottom. This is a very rough estimation based on average distance between knuckles on a thumb.

The surface is semi gloss suggesting standard finishing techniques with a sealer/oils.

Via Jade V Lewis (@jadevlewis -Thank you so much for these amazing views!) 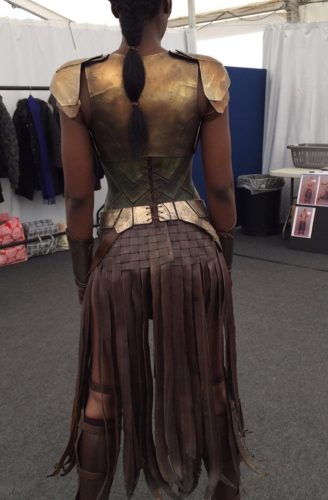 The backs of the skirts appear to simply overlap. The rigidity of the leather, especially traditionally wetformed leather apparently made to fit the curve of hips, probably helped hold them in place.

It appears the left side at least is one continual piece of leather from the back, to the sides, through the “mitra” at he front and around to the back again.

This can be seen in hi res images from http://getyourcomicon.co.uk/news/45-new-wonder-woman-photos-released/

These photos show the skirts can overlap left or right.

The hip level belt appears to be cast so that the plates are semi-rigid and the gaps between offer  more flex (this may affected somewhat due to being mounted to the very dense woven skirts) The belt plaques appear to be about as dense and flexible as leather of a similar weight.

The pattern of shapes appears to be symmetric and follow this order:

Inverted decorated inverted V (/\) at centre front then a rhomoid (/_/) then a trapezoid (/_\), another rhomboid, an irregular pentagon that is longer than the rest of the plaques, and finally a narrow rectangle shape that is used for lacing (three holes per side.) There is a gap that is able to be seen even in group shots. The following is from a behind the scenes featurette.

There are V shaped belts on the left side of the skirts. These appear to be a different leather to the skirts and is a more yellow tinted brown. There are variations in this piece as some are worn alone while most have either a matching piece on the right or a second V shaped belt with snake scale/fish scale plate over the top (the direction is towards the pointed end of the belts.)

The “mitra” follows two distinct types. The first is a simple layer of matching leather following much the same shape as the lower layer with concentric rings of thing strips of leather woven through. The pattern can be easily observed in the photos at the top of this post.

The second type is very complex and several layers thick. The first layer appears to be the piece of leather that is continuous with the strapping skirts. It appears to be split vertically through the centre. It is not possible to tell as of yet whether this split extends to the top edge.

The following photo attempts to show the additional layers through use of colours. 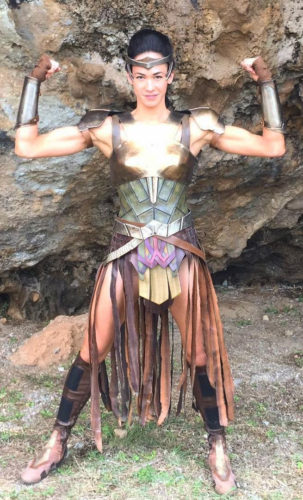 The top two layers of Y (inverted) and W shapes are indicated in pink and purple- these appear to wrap around to the back in photos from the side but it is difficult to ascertain where these wrap to. There is another Y (inverted) shape as indicated in blue that also seems to wrap behind. There are two vertical strips to the outer edges indicated in green. The next layer is indicated in yellow and is of three gently flared sections. The final layer which I believe to be continuous with the strapping is obscured in this photo but can be easily seen in the photos of Mayling Ng in the previous sections.