correct shape or trick of the eye?

I am also finding it hard to trust all staged images, as there is a tendency to pouff out draped fabrics when they should fold inwards. I wonder how many people remember the infamous natural form pattern?

The Simplicity 4244 pattern with the paniers turned out and padded? 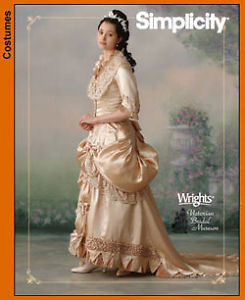 The original has the area padded out in display, though not turned inside out: 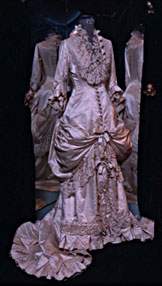 I would love to see this updated, polonaise style princesse dresses are a staple in the pattern books of the era that it’s nice to see real examples whenever possible. Seriously, every book has at least one princess and at least one is really a polonaise.

And if the Met can have a garment padded in inverse to what would be expected, then yes it’s very easy to to!

Centraal Museum too! (but this is another good example of the mid-late 1880s shape to the skirt, the pouffing over the hips and of the little puff over the bustle.. not really feeling it. But yeah, that’s another Sunburst reference!)

This is simply more a case of feeling too full at the front hip. But I have seen more extreme forms of firm support in contemporary photos.

But I was looking at a gown I adore but feels later than the date as well, and I am trying to tease out whether it is staged or original to the gown.

So what is it that makes this feel later than 1875?

Simply put the shoulders. They are very square. Very square indeed and that is not because the mannequin has square shoulders. The sleeve shape also is very angular, another feature of mid to late 1880s patterning.

Compare the shoulders to this very definitely mid 1870s garment:

See the slope of the shoulder, more obvious from the back. The front arm seams are further under the arm than above too. But this is a very well made example of the time so the structure is a bit firmer and so holds a firm line compared to other examples of this decade.

The split and pointed tails of the scaled gown can also be seen right through to early 1890s in Worth garments (see the silvery blue gown also from the met on this page.)

But this is why I am devouring everything I can find about what is absolutely known as far as dates of garments. There are a few garments dated to mid 1880s that have a very gored skirt shape that is, as above, original shaping. Even the above has a mix of gored and flat panels. So it may be that the house was experimenting in shifting fullness around very early. That though is proving difficult.

Anyway if anyone would like to sponso a trip to see the Worth Archives- maybe a month stay to be able to actually go through all documents then maybe my mind would be rested!

I already know the pattern books and periodicals do not show the flared gored skirt shape earlier than the early 1890s. I have gone through every single issue of Der Bazar that has plates and patterns, I have random patterns from other periodical, and of course the cutting books. In fact skirts go extremely boxy before they get pulled to the back and then the hem flares out again. But again Maison Worth was known to anticipate fashion as well as push it in a direction most especially in cut. SO that could apply to shoulders and elbows too…

Filed under rock the frock

Tagged as sunburst, worth