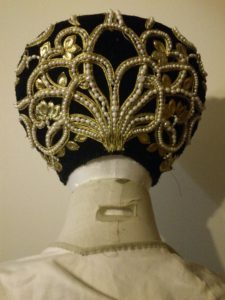 The back is slightly longer than the original I made so there is a bit of a gap. Currently binding the individual cords in gold thread. It is taking a few goes as my needles keep bending.

The double border after the dye was removed, being cut into usable strips.

Then one of those strips being pressed for use. Hopefully enough to do what I want. There may have to be creative use of scraps if not!

The bodice! So proud. I’m using a few actual tailoring methods here 🙂 Heavy thread to baste the layers and to ease the armscye. Yes. the thread is slightly tight which draws the fabric closer into the shoulder and arm. You can seen the deep clipping used to fit the armhole too, it was really distorting the fit so it had to be done sooner rather than later.

What’s this? Yes, stay tape around the neckline (including deep front opening. I wanted a round neck but all those images of Anne show her nckline really scooting right up to form an inverted V at the front so it makes most sense to make a V in the back.

But a V is on the diagonal so stretches out. The tape is to prevent that.