My Marie Antoinette hoops are too big to easily adjust which is why it has taken the entire 7th Season of New Who to get them to the point I can just push the hoops out or in. 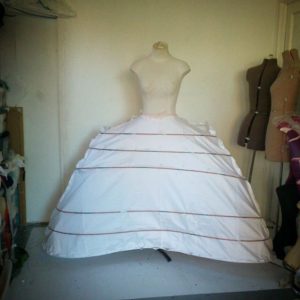 These are deceptive, a little. The first test wound up kidney shaped and I wound up with more elliptical and normal shape tonight!

They are currently 160cm wide, but the hoops are a little deeper than I want and they’ll be flattened a little more once the tapes are in place at every level I’ll also have to drop the diagonal short hoops.

I still will be able to layer both fine cotton and tulle to soften these. In photos of Normal sitting there are a few indicators of hoops but they are subtle. SO I definitely need to remember all the fluffy layers needed and that adds bulk both depth and width. But I really think it’ll be the tapes inside that help. I may even wind up sewing in a few more sets than I normally would.

I originally wanted to make this to join in with the Robes de Cour group Kendra had organised a few years ago, but I wound up setting that aside as I wanted to be in the group and between me saying I was thinking about making the gown and not saying so in time and what not I wound up shifting to starting an actual Robe de Cour based on the various silver gowns from Sweden. I stalled on that as well as I just wanted to not use the dead dino fabric I had!

Basically I knew how much fabric any of these options needed and I wanted the best fabric for my needs. And I only managed to find that in may this year! That is the fabric above that had to be decoloured. It was very brown originally 🙂

But since then I have become completely smitten with the “confrontation” gown too, so well there may be a few gowns to wear over these hoops and eventual petticoats as well.