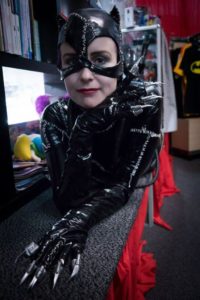 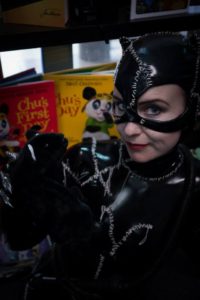 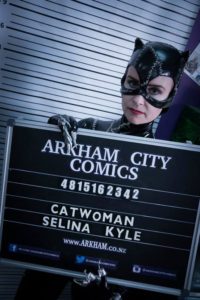 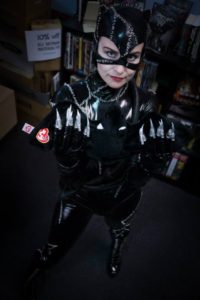 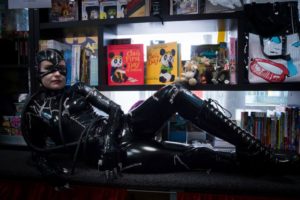 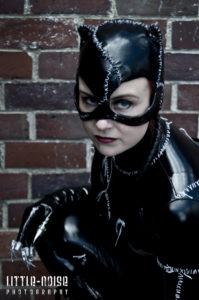 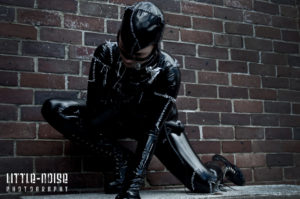 To Do: remake the cowl, again

I completely recreated the costume from 4 way stretch PVC from MJ Trend. The fabric was chosen as it is permanently shiny and stable. The origianl costume was made out of latex (sheet and molded) which requires regular oiling to make it glossy and does break down quite quickly over time. It also has a smell I personally find unpleasant.
The bodysuit has some creative piecing and seaming to allow it to fit and still give a good full range of movement. The fabric is also supportive and very comfortable to wear.
The stitches were again sewn directly into the fabric with crochet yarn.
The cowl/mask is created from molded felt and covered in a patchwork of the same PVC as the bodysuit.
The corset is built with steel and plastic boning and was created from a pattern I developed for my first costume.
The gloves were patterned to my hands and sewn from the same PVC fabric.
The boots and whip were bought from Cosworx and TradeMe respectively.

October 2006
Made from a 4-way stretch lycra fabric with an ultra thin layer of PVC, pattern customised to reduce visible seams, white stitches sewn with a thin crochet cotton directly through the lycra. Corset adapted from c1900 corset from Nora Waugh’s Corset’s and Crinolines and made from one layer of heavy canvas covered in the same lycra as the bodysuit boned with cable ties, plumbers coil (aka drain snake) and 1″ wide metal lumber strapping.
Two sets of claws, first set from polypropylene sheeting the second from thibles and needle threaders glued together.
Boot covers for initial costume draped directly on the leg and sewn from cotton twill and the same lycra used for the body suit.
Cowl drafted on a head form cut to my head dimensions with a base layer of very thin felt the same body suit lycra appliqued over the top all seams positioned to lie under the deliberate white stitches.
This version has been passed on to a friend.
Photographs taken by others:
New Zealand Herald, Monday 23rd October, page 2 : 1
Taken by other people from the convention forums: 1 and 2
Photos organised for the Cosplay contest: 1
Official photography from Armageddon: 1, 2, 3, 4 & 5
Weta, Auckland October 2007: 1 & 2
Weta, Wellington, April 2007: 1, 2, 3 & 4