To Do: redo the claws on shoes and calves to have the same smooth edges as the rest of the armour

Inspiration: Having been inspired first by the character Nyreen and then the unnamed female turian in the Citadel DLC I finally decided to paint the mask up as my own design. 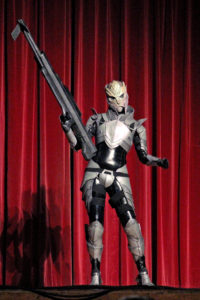 I sculpted this all in grey plasticine on a foam wig head. I went through a few full head sculpts before finding the right balance between features and that also would fit over my own (there were a lot of.. calibrations). While these photos look much the same there was about a pound of clay removed and added each night to change the proportions. It went through a ‘cat’ like phase and a ‘Planet of the Apes’ type phase until I was finally happy with the general look. 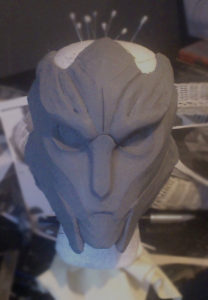 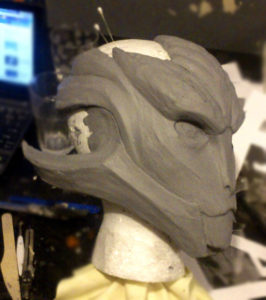 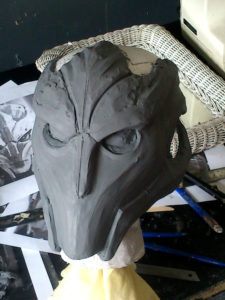 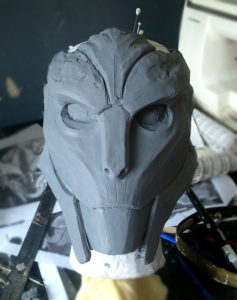 After this point I then cut the pieces apart so that I could make the mask in 6 parts total to allow for some movement of the jaw and to allow for some airflow between layers (I’ve been glued in to asari headpieces and lekku and montral and it is a bit of a drain on health over time.) This was easily the toughest part to get over, as I would essentially destroy my sculpt if anything went wrong.

I cut the mandibles off first and transferred them to a flat sheet of plastic. Then the face was smoothed again and a new mouth line created. Then finally the jaw was removed and transferred to another wig head and reshaped. 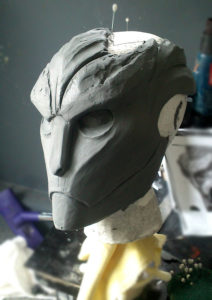 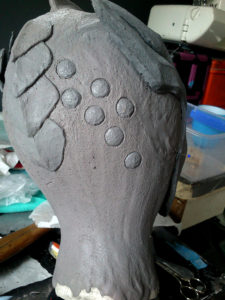 Once the shapes were as I wanted I oiled and built walls on the clay ready to cast. 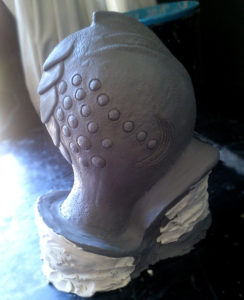 This was in Ultracal as it gels as it cures which means you can build 3D molds. I made sure the mold was at least an inch thick all over. Once the molds were cured I then removed the wig heads (destroying them in the process by the highly efficient method of stabbing with a large screwdriver and levering the polystryrene out.

Unfortunately the clay proved difficult to remove from the scalp mold- this is due to me wiping too much excess oil off. This necessitates the use of the screwdriver to remove as much clay as possible as well as fingernails (which proved the most effective if not the most painful method). Finally acetone and a toothbrush was used to remove the last of the residue of clay. 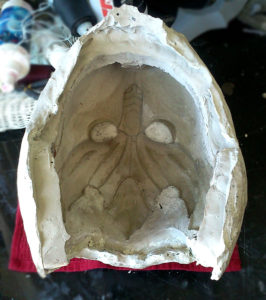 What made this task even more difficult was a bad batch of latex (cry! 5L of product wasted) due to it getting too cold either at the warehouse or shipping to NZ or by courier within NZ. I have no idea at what stage this was but I had it confirmed that this is a very big problem when buying the stuff in NZ. Freight often gets cold even before it reaches our shores.

What this resulted in was the latex gelling and not creating stretchy bonds- it cured and cracked as it shrank. I wound up buying pre-thickened latex and tinting it with acrylic. This worked well and I finally had a good cast.

Below are the bad casts showing warping and cracking.

I used a base layer of a mix of Latona’s and other alcohol activated paints. First a flat pale grey then a wash of maroon and another layer of white to define the lines and facets of the face.

I then misted a mix of yellow and raw sienna airbrush ink (acrylic) over the pieces.

The pieces need to be held in place somehow so I created a fabric hood that I latexed over which it was stretched on a form. The skull cap and facial pieces are then velcro dotted in place as the glue on the back of these bond extremely well with latex- I had to use alcohol to clean paint off the scull cap to allow the glue to adhere.

In the days before I debuted the costume I decided to make my pieces match the armour more- I had used an interference violet pigment powder to give an added element of light over the flat pieces of the armour (first colour in the first image below). So I used the interference green with pale yellow over the forehead and flanges of the face and mixed interference blue with a pale pink over the jaw, cheeks, mandibles skull cap and hood (neck). I then defined the bumps on the skull cap and the scales down the back with the same yellow mix. 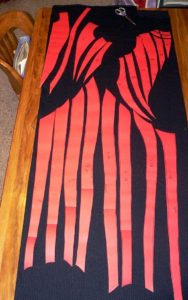 This was first drawn out on a test suit with enough panels already cut and sewn to be able to cope with even more seams added. I wound up transferring the pattern to card then deciding to scrap it and try for a pattern that actually could be taken in easily as adding in the extra seams and thus seam allowances caused the pattern to get larger.

I discarded several fabrics while creating this suit before deciding to stick with stretch PVC as it has body and support and with seams it looks in world and practical rather than just super shiny.

I overlocked the seams by home machine then industrial. Until I broke a needle and decided to not replace it. Rimoldi make great machines but this one was not built with the user in mind- the screw for the needles requires an allen key and is difficult to get to. Rethreading is incredibly difficult too.

Finally I had to put elastic straps at the feet to hold the lower legs tight and to cover the top of the foot.

I first test drove a papercraft pattern available online but it was too large and slightly asymmetric. I then would up using a few shapes as a guide (collars, back pack, shoulder points and knees) then using backing paper to pattern everything else by wrapping my mannequin in it and drawing over it. Then there were at least two card tests made before the final pattern was developed (all those pieces are in red). 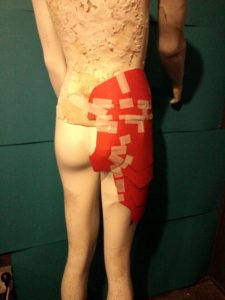 I traced around the pattern pieces in black ink and then cut each piece out with a swivel knife, beveling tool and scissors. The leather was damp as if were tooling (just enough to change the colour of the surface permanently but not wet) and then details were likewise tooled with swivel knife and beveling tool. The texture was added using a texture tool and also a wire wastebasket hammered into the surface.

The pieces were then soaked in cold water for at least 24 hours and shaped over PVC pipe and other forms. 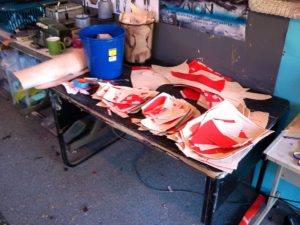 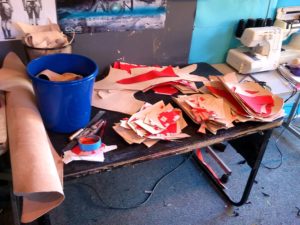 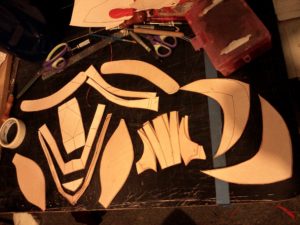 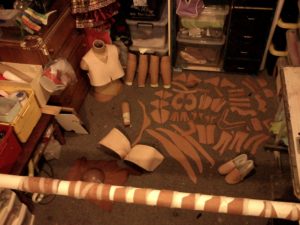 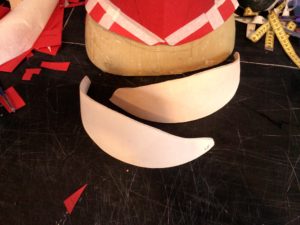 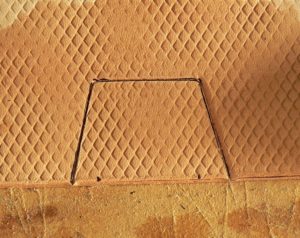 I used a water based contact adhesive to laminate the formed pieces to another vege tanned leather (cured so not able to be shaped- instead I added darts and seams where needed.) The shoes were additionally held together with Shoe Goo.

I dyed the outside and inside of each piece with Fiebing dye, which is alcohol diluted. To both seal and condition the leather I used Rub ‘n’ Buff in Silver Leaf to polish the outside of all pieces. This whole suit used two and a half tubes. I squeezed the polish into a shallow dish and applied the polish with some faux suede- this allowed a wide surface area to be applied at a time.

To properly seal the leather I also used Resolene. I applied it plain over the mesh texture and then mixed in interference violet pigment powder to seal the smooth surfaces. This creates a shifting purple glow over some pieces, adding extra interest.

I used rivets of varying depths to create articulated joints and wide textured elastic to hold the hips, thighs and upper arms in place. It also is used on the knee pieces. I also cut slits in the armour harness and threaded non roll elastic through with suspender clasps on the ends to grip to the shoulder pieces and keep them in place. I also used satchel latches to hold the front chest to the back. Velcro was also used to hold this in place as well as the greaves. The gauntlets were riveted to the elbow cops and a width of leather holds the upper inside in place. The rigidity of the leather keeps the lower part of the gauntlets in place.

This was fibreglass over foam core card stock- as used by architects et al.I used cardboard tubes and pvc pipe for the interior of the scope and rifle ends. The stock and butt are made from laminated foam core carved to shape and fibreglassed. 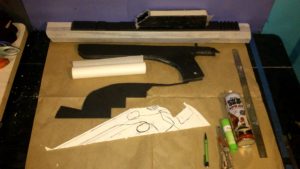 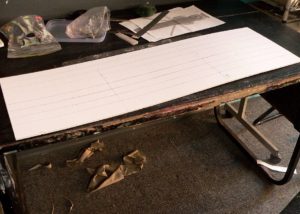 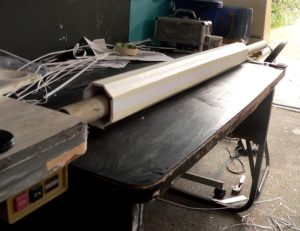 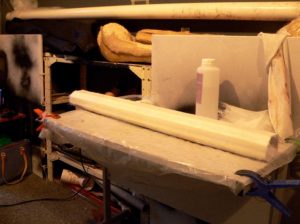 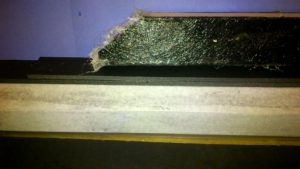