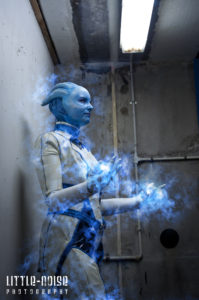 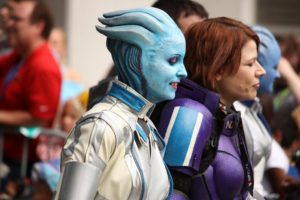 I had made a bad cast of my Asari headpieces and wanted to see if I could salvage it. I wound up being able to repair a torn tentacle relatively easily. The forehead edge is however still a bit too thick and obvious but still wearable. The pieces are in two parts to allow the folds at the neck to move and buckle independently of the forehead. This also allows for a closer fit to the nape of the neck and over the ears. 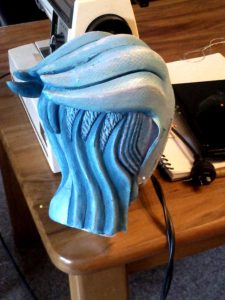 I used several layers of paint to shade and tone the headpiece. A flat blue and lilac were used first then thin coats of pearlised and translucent inks and paints.

The costume is made of several parts. A bodysuit and jacket, belts and armour parts. The jacket was complex and the lack of a side seam made fitting tricky. The seam from neck to wrist had to be continuous and so the body was assembled in a different order to normal.

I originally quilted black outlines for the jacket expecting to paint the silver. However I wound up appliquing silver fabric over the top which hid most of these lines. 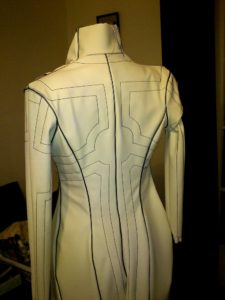 The bodysuit also needed multiple parts. The white armoured section was double layered and the seams piped with silver coated interlock. I have a page on piping stretch fabrics (under “construction notes” in the menu above) that explains how to most easily do this. I also was able to cut the silver piping for the bodysuit and jacket using strips of masking tape on the reverse of the fabric. This worked well as the masking tape had a low tack and could be reused multiple times.

I also was able to cut the silver piping for the bodysuit and jacket using strips of masking tape on the reverse of the fabric. This worked well as the masking tape had a low tack and could be reused multiple times. The blue was also a customised fabric- a shiny royal blue PVC coated interlock was overpainted with a clear matte urethane paint tinted with turquoise and pearlised blue pigment powders.

The bicep armour was made from PVC pipe and the rest from wetformed leather. The greaves were tooled then stretched over fibreglass forms- each leg in two parts. Once dried they were more rigid and were still able to be sewn and glued together. The knees and bracers were also wetted though not stretched over forms to make them as rigid. All pieces were painted with leather paint to bone white and then silver Rub n Buff was applied as well as Dubbin to seal the paint and tone it.