(Have a piccy of me playing Swtor while wearing Shae’s gear. Not easy!!!) 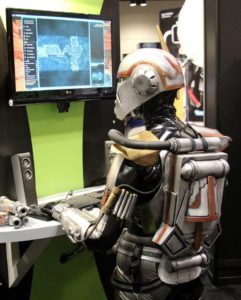 So I’ll be using what screen grabs I have and will get some more to see if I can show just how much the armour has changed. I have the action figure, the minibust and most of the released artwork.

But it will need to wait while I sort this out: 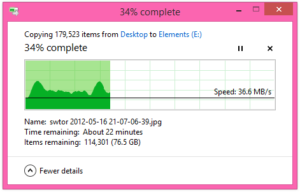 A few observations so far:

Her jetpack is no more than 2/3 the minibust.

Her gauntlets are about three layers, one of which may be a pattern in the suit layer

Her greaves are curvy but have pointy flares at the front bottom.

There are pinkish-lilac tones on many elements

She has the standard game crew neck not a high collar, which will make wearing a balaclava more difficult.

She has a hook on her belt for her helmet.

The “red” parts are quite orangey- difficult to tell if this is a limitation of the model or a deliberate choice.

The various greeblies are shaped quite differently.

Her right hand pauldron has one spike, not two.

Her pressure tank does cut in to the jet pack, doesn’t rest on it.

Her greaves and chest plate follow the curves more closely

Her groin plate is wider and more in keeping with much later types.

Some of this does make for a mostly aesthetic change but some will really affect functionality and require very different engineering. The gauntlets for example skim the arms, and the upper arm greeblies go all the way around and are clearly mounted on a tooled/layered leather strap. No clue as to how the are held up. Oh!!! No gas tubes!! Heaven!!! There were part of what made it so difficult to put on XD

I have Plans(tm) on making this an all day friendly costume.