The Soft Pompadour and Psyche Knot

After all the tangles have been removed, a parting is made, beginning at the forehead and running backward through the centre to the top of the head, but not down the back. 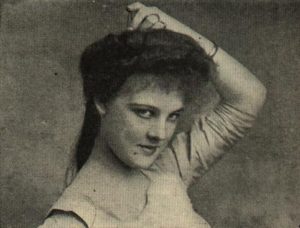 The hair is now in three divisions, the two front ones and the back portion. Before making the pompadour, all the back hair should be carefully combed and tied back so as not to be in the way. The pompadour may then be put up. First smooth the left side, brushing it foreward, then up and finally back into pompadour shape. Fasten it at the top of the head with a hair-pin. 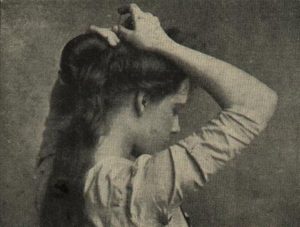 Bring the twisted coil up toward the top of the head, shaping it into a psyche effect. Fasten it securely with two or three hair-pins as shown in the fifth illustration. Then continue to twist the hair until it is all used, coiling it at the same time, loosely around the first part of the psyche knot. Fasten the completed psyche knot with hair pins.

To complete the coiffure, fasten a wide slide just under the psyche knot. two plain tortoiseshell pins, as shown in the illustration, may also be worn.

An attractive hair-ornament for evening wear is a band of gold braid mounted on a velvet band, which is trimmed with narrow ribbon velvet and gold braid.

From Girls Own Paper and Woman’s magazine, 1911.