(Photos by Frasier Clark, and RS)

To Do: replace beading with chain beads.

Updates since last photo: none

Inspiration: Australian and German productions of Phantom of the Opera.

Skirt of taffeta and ribbons, pleated hem with more ribbon. 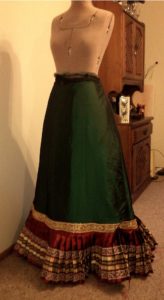 Bodice of velvet lined in drill. I used the US style zip up the front so my decorations snap on to the bodice with metal snaps. 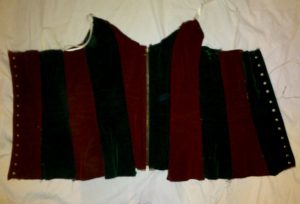 The decorations are on plush velvet. The outline was stitched soutache (back stitched not couched).

The gold shapes are gold metal organza fused to the velvet.

The shapes were then covered in short gold bugle beads in a herringbone pattern with paste jewels.

The tabs were also made from shot taffeta with fused velveteen circle. These circles then had saree trims added as well as a narrow gold braid.

The skirt support is nearly self supporting and is made from 30m of stiff net.

The support is made from a base of gored panels covered in short pleated ruffles.

The ruffles are sandwiched between gored layers so that they do not get in the way of the large snaps used to fasten the skirt.

The skirt is able to be worn and put on as per the stage show, there is a large clip at the waist, the waterfall drapery and the extra decorated tab hide this closure.

I will save my year in review until it actually is the new year ???? But it’s been very up and down in a few wyas.

Tomorrow I shall be celebrating in the now nearly traditional way of friends during the day and family at night. This time with added crafting. So guess what I am bringing? That gloriously tacky collection of gren and red and gold and shiny things: My Habbibal Slave girl/Elissa ensemble.

Well not all of it. Just most of the outside so I can work out how many beads I can use and where and how much more ribbon I need to buy.
DEC. 27TH, 2010

So today Geoff’s was open and I had a bit of a post Boxing day splurge ????

Lots of little hair brushes (10) good for make up and cheap enough to do thin layers of latex in molds ????
Three 0 brushes as i go through them like woah-now to find my 000 I bought the other day…
Plastic Palette knives- I clean these as much as possible but still go through them on plastic putty
Three little paint pallets- to use for mixing paints but also for molding ???? I know have three sizes
One spool of black overlocking thread- I crushed one of my good spools so this is a replacement
One block of flesh coloured cernit ???? To add to my small pile- definitely want to make OOAK dolls again
Two rolls of 180grit sandpaper- my favourite for sanding plastic putty- it leaves a smooth surface but cuts through quickly
Pack of ten Craft containers- for make up ???? I am going to clean and replace some old powder.
Lots and lots of gold braid ???? This is the same as what I used on my hannibal bodice so I now have enough for the whole costume ???? And possibly more. 80c/m!!!! I got the whole thing for $16 as a rough guesstimate of at least 20m. I think I may have underestimated and feel bad but the gentleman at the counter said it was okay. I’m a repeat happy customer so it does keep my loyalty????
64 times around the 25cm board… okay yes. I do feel bad. There’s more like 30m. But this is all good for getting that project out of the to Finish pile ????
My other trims to add the 100m of gold ribbon to;)

from back row to front row:
Red crepey saree with added gold fringe.
large plastic gold beads (plastic yes, this is a costume not an historic piece and I nearly fall down fromt he weight as it is;) ), glass goldcoloured bugles.
gold ribbon from a skist and shawl, gold 10mm ribbons, wide silver and gold braid from , narrow gold cord, more gold beads, multicoloured beads of glass and plastic (pack of flat back glass stones in front) mainly red plastic beads plus some more glass beads.
Gold braid used in a number of productions mostly the US.
Creamy gold coloured silk tassles.

Is it obvious I’ve been organising my image files lately?

For anyone local or in Oz interested in some of the things I’m trying to part with. Reply here if there is anything of interest and I’ll update over there to say it’s taken.

I have also just washed and am repairing my two Phantom dressing gowns. And I had a brilliant idea for my own Hannibal dress. Not so much a new cunning plan but realising I have been making life much harder on myself than need be. It involves yet more heat ‘n’ bond and the saree and jacket/skirt/scarf set I have that are both heavily embroidered in gold on red.

I tested my Cascade sewing mahcine again. It works really well still but still smokes from somewhere inside- the smoke escapes near the bobbin and I admit it gets pretty hot right there. I am going to have to see if there is an excess of oil or what.
it does a nice series of stretch stitches so it worth trying to fix.

…which means sewing in the garage isn’t so bad again ???? It is a converted garage but an uninsulated metal box never the less ????

So I finally have my projects sorted in a sensible way, the sewing machine is sorted in an area where the kit and threads are easily located. I managed to do three hours of sewing today, not bad really ???? right at the limit though as my hands were getting numb towards the end ????

I found my Mystique dress and all the offcuts I had from making that and the Dawn and the GG Leia dresses. I think I’ll make a corset and collar for the Dawn actually as I suspect I’ll want a fairly easy dress at some stage!

I looked at my project containers (50l plastic containers) and baggies and I have a lot but not as much as I dreaded!
2 for Star Wars (including a couple of Padme’s, TIE flight suits, Mothma and green tunic Mara)
1 for modernised historic (Carlotta and Satine pieces as well as my Eowyn funeral gown)
1 for Phantom stage costumes (Elissa and Wedding- much of it is for Elissa as it’s a huge skirt!)
1 for late historic (hunting outfit, Absinthe dress and bits for a wool spencer)
1 for early historic (white ropa y saya y jubon, tangerine Gothic Cologne, Pink Westfalen)
1 for modern clothes (actually in two baggies right now, skirts and tops and trousers galore!)
1 for projects for others (including a doublet)
1 for late historic fabrics not yet cut into (red silk taffeta, blue poly taffeta, blue brocade, white voile)
2 for velveteen pile of doom (down to about 40 meters of it)
1 for sarees and scraps

So not too bad. I have thinned out a fair lot and I have as much to put into clothing bins and resource centres/art groups. Some more may wind up over that side anyway as I decide on what projects are more important than others. Or which I am happy to pass on.
My finished costumes are elsewhere ????

I may do a complete list soon. I will be getting more piccies of the in progress dresses hanging up as they are much further advanced than I keep thinking ????

My overlocker also needed refilling with oil. About a cup of oil took it from half way to almost full. Now I need to figure out what type of oil would be best to get for the next refill…

I just bought 100m of gold ribbon, 15mm wide or so. I think I’m feeling the bug to work on my Elissa gown again. My main inspiration is of a really early German production photo. So, inspiration piccies:

The first is my all time favourite. It’s highly contrasted with very clear lines and scrolls.
( Collapse )

When I got to see Colby all I kept thinking was.. It’s Princess Leia.. Carrie Fisher is a soprano… You can see some semblance in other production photos but as I was centre front row in Hamburg I got to see her very well;)
It looks very dark in these pics but it does look like the skirts are made from a heavier textured fabric like the first Carlotta skirt was. Even if not I’d really like to make mine from matching velveteen as my bodice panels.

But I still love the first Aussie bodice appliques better:

WHich you can see in my base pieces for my last attempts at making these. I have beaded a heck of a lot of the bodice piece already.

And the Aussie waterfall drapery with the extra tab:
And the full front of the Aussie dress as worn in Korea as a comparrison:
My wonderful heat ‘n’ bond went missing after the fire so I’ll have to buy some more. It’s good stuff. It’ll be perfect for applying the floral shapes to the tabs before any gold is couched to them.

Maybe I’ll make this for my half birthday party… ????
I am pretty sure I want to get my movie!Carlotta reworked for AuckGeddon.. so if anyone wants to be a movie!Christine… ????
(what I had got up to before I switched to Catwoman in 06 ????
Hrmmmmm I think the red shot taffeta though not the same as the movie would be a better fit for the drapery though.