Inspiration: Galadriel under the influence of the One Ring

In 2003 I was working on my Black Diamonds costume and had hoped to wear it to the Armageddon Cosplay Contest in Auckland that year. Time crept up and beading takes the time it takes.

So I decided to try for a simpler but slightly unexpected costume and test some old theatre techniques at the same time.

The gown was made from several different sheer fabrics, a crepe, an embroidered chiffon, etc. The layers are only in the exposed areas. Under the armour was a single layer of fabric to reduce bulk.

The armour was made from felt soaked in glue.

The above was a test of the original formulation- PVA/White glue and felt. It was slightly too brittle for such a long piece. I eventually used a solvent based glue, which was more durable but still bent and broke the point.

The original method involves soaking felt in a water and glue mixed. The felt is then able to draped to almost any shape and cures to firmness. Further layers of glue are painted on to soften the texture and provide gloss.

To note, this method does very much depend on the quality of glue and felt to succeed. A good wool-rayon felt will drape and fit most curves, and a good flexible PVA will also give additional support.

I was inspired by this to work with fibreglass and fabric- while looking up information on fibreglass and fabric I learned that this is a well established techinque in customing car interiors- especially for speakers. The fabric is stretched over a form and is soaked in resin. This is too brittle to last and so layers of fibreglass tissue and cloth is used.

I decided to use simple polymer clay to create the brooch and leaves of the necklace piece. 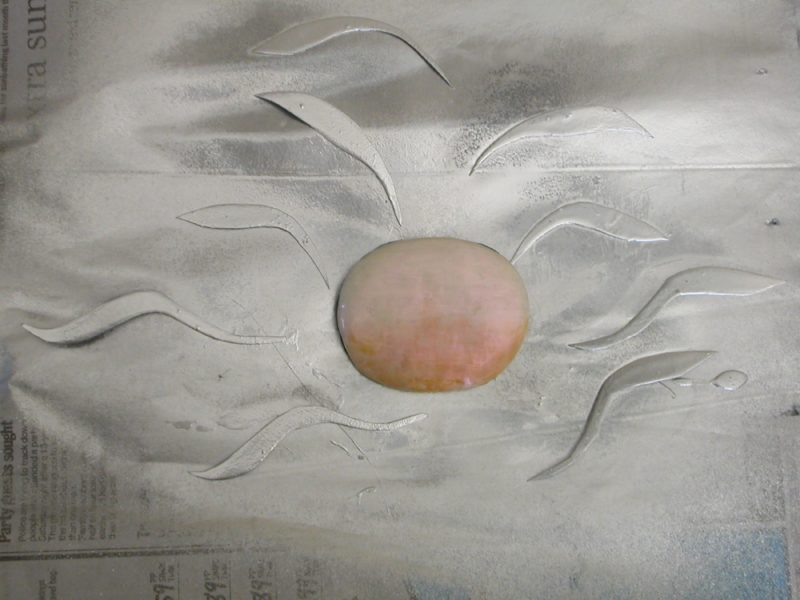 The brooch was painted with acrylic paints then sealed with a nail polish with an iridescent pink glow.

And then finally I stepped into SFX by casting my ears in plaster, sculpting ears and casting those in gelatin.

I was on a very tight budget, this entire costume was intended to fit within that, and so made my own play dough from flour and water instead of using silicone to capture an impression of my ears. I used cheap plaster to cast the ears and used some more of the same polymer clay to sculpt the ears.