I have been obsessed by this costume from the first images released and then the FIDM exhibition where it was displayed so that all the draping glory was revealed. Sigh. So in 2008-09 I made a version I am still very happy with. It even got a photo in the national newspaper

The reason i loved it so much was that it was a clear homage to Leia. 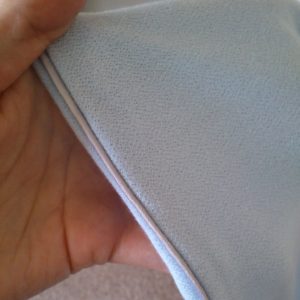 This fabric seems to do the same sort of colour changes as the original too- from super pale to quite vibrant but pale to muted, I may try for photos under low light again too..

Okay, so it was a desert scene so already part of a nostalgic moment in the movie (well scenically speaking…) but the hair in bun shapes at the sides of the head, the central pleating, the hood, the floating sleeves. Everything was a tribute to the original lead woman of the movies.

So a few years ago I found a roll of a crepey knit in my local fabric shop. It was a mint green-blue so I wasn’t too sure I’d want the work of dyeing it- not so much the work but the risk of an uneven dye on such heavy fabric.

Forward to last year when I not only found it in blue but in two rolls and what is apparently enough for three of the things. I love the pattern so much i wanted to make it a few times. Sometimes it feels like something was a fluke but no. This pattern has now worked 5 times for me (yes, obsessed) and to a lovely costuming friend who used my scaled pattern. I only share my patterns with friends, for a number of reasons but mostly because a lot of commercial enterprises have straight up used my work to make money for themselves and I in no way want to be responsible for more of that happening.

Anyway. I had to dye my own piping for my gown and it seems to be really ideal. It’s just 3 droppers of FW acrylic ink in abut 2L or 2 gallons (~8 cups of either system anyway). Soak the piping in water, drain then swish in the bath and remove. Strain excess fluid out and it will dry very quickly with the same satin sheen it had originally.

I have some mechanical stretch cotton twill to make the bodice support. But I am still needing to go to other stores to pick up more beads.

Okay I do love this cloak. Even if it feels like the wrong side of the fabric is the outer. But the sticker on the roll confirms the perl side is to the outside. So do the exhibit photos.

Comments Off on Padme cloak wrangling