Another hospital visit- for me, again

I am booked in for my infusion, which is great 9sucky to have but great they are available and fantastic staff, really, really fantastic) but I also have been to referals twice this month and was hoping for a bit of a break.

So x-rays are a bit par for the course for people with arthritis as a major symptom. I just don’t ever recall previous appointment letters being so scary. Pathology as a term really isn’t that bad but when in bold, in the middle of a letter, it’s a tad confronting! in this case:

It may be that I have just seen an ortho and pointed out my messed up wrists were more of a concern for me right now than the trigger finger issue. In fact it’s such a big issue I can’t have the standard trigger finger surgery. It’s a much grosser and riskier process. But that no one was looking at my wrists despite me actually missing entire bones. My ulnar has now gone from sitting at the side, to rotating and sitting on top of the little bones to now, essentially, pushing them until the were erased entirely to sit in a more natural position again. 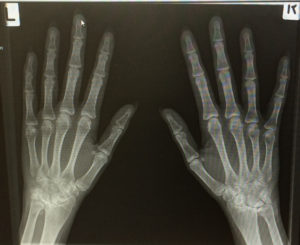 But check out hose beautiful straight fingers. I actively work my hands to avoid the typical deformity, so I have managed to save my fingers through a bit of luck and care

Comments Off on Another hospital visit- for me, again